Stay in the know. Subscribe to the Ansys Blog for email notifications.

ANSYS Discovery Release Powers Up 3D Design
By John Graham On May 18, 2018

The Engineering Behind Why It's Too Hot to Fly

I’ve read a lot of articles talking about an interesting fact: this summer was so hot that in some cities like Phoenix aircraft could not fly. If you are an engineer or a pilot, it should not be a surprise that in hot weather an aircraft’s performance can deteriorate until the point it is unsafe to attempt take off. But maybe you have not considered all the possible causes of why it's too hot to fly. I will try to explain things in a very basic and simplified way, for the benefit of those who are not familiar with these phenomena. 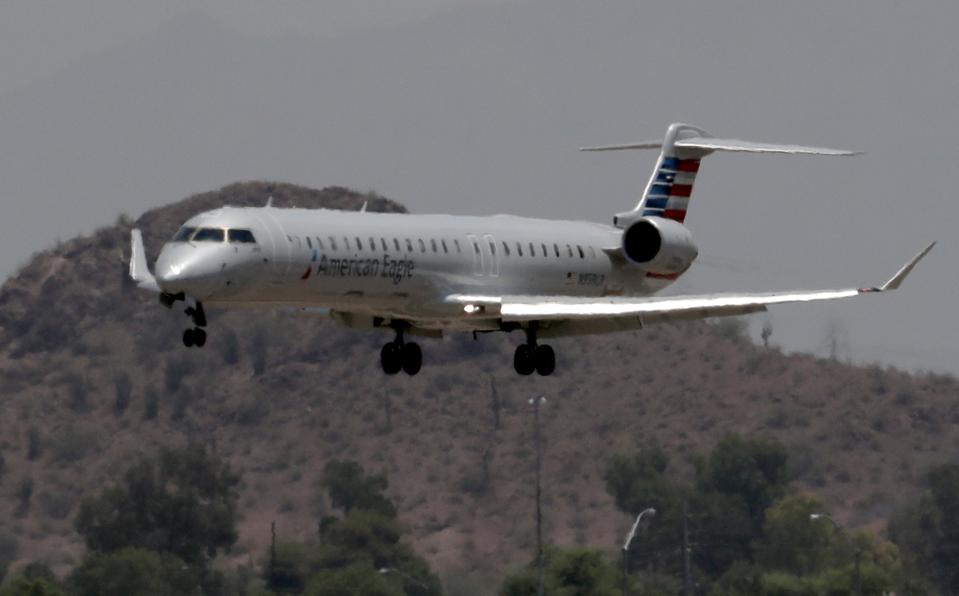 We all know that an aircraft flies due to the lift force acting on its wings that is generated by the relative movement of the wing and the air. If you move the wing fast enough it will lift, just as you learned when you were a child putting your hand out of your car window — at the right angle the air pushes your hand upwards. Of course an airplane is bigger and heavier than your hand. But the principle is the same — the aircraft just needs more speed and more surface area to generate enough lift.

Air density changes with pressure (and so with altitude), temperature and humidity. An Aircraft’s performance is defined in “standard air”, that has a temperature at sea level of 59° F (at 29,92 inches of mercury of pressure). When it is very hot, air becomes less dense and you need more speed to takeoff and to keep the aircraft aloft. To reach a higher takeoff speed means you need much more runway. As there are safety margins to consider, the available runway can simply be not long enough. Plus, your climbing angle will be flatter and your climbing rate will be lower, and you could be unable to follow the published takeoff procedure for a specific airport.

Every time pilots take off, they use the conversion tables in their operating manuals to see if the conditions of pressure, temperature and humidity and the performance of the aircraft are compatible with the length of the runway and the climb rate they will need to clear any obstacles. In extreme cases, hot summer temperatures can be a take off limiting factor.

Engines have a maximum turbine temperature that pilots must monitor and control. Above that limit the engine can suffer damage. Take off is when you ask the engine to give you more thrust, so the internal temperature is higher. An already high external air temperature and lower air density makes further demands of the engine.

In order to avoid overheating and possible engine failures during take off, pilots input the external temperature in the flight computer to receive as an output the “take off power set”, which is the maximum percent of the engine thrust you can safely ask of your engine. In very hot weather, it will be far below 100%.

A curiosity: You will probably be surprised by the fact that the take off power used by airlines is usually below 100%. This allows for noise to be reduced, an increase in time between engine overhauls and it also saves some fuel. What pilots usually do is to calculate the maximum air temperature at which the take off can be safely performed and put it in the flight computer, so the FADEC (Full Authority Digital Engine Control) automatically calculate the takeoff power setting and speed.

When air is too hot, the calculated takeoff power set may not be enough for a safe takeoff on that runway, so the aircraft is grounded. Takeoff power depends on the aircraft takeoff weight too, so your flight computer may tell you that, despite of the very hot air, it is safe to fly with a lighter configuration — meaning the flight must leave some passengers or freight behind or to plan for a refueling stopover — but both of these options impact the profitability of the flight for the carrier.

If you fly a new generation aircraft, the probability that it is built with a significant proportion of composite, glass fiber or carbon fiber reinforced material is high. They are great materials, light and resistant, but some of them have a temperature limitation. The pilot checks these limits as part of the routine pre-flight inspection to be sure they can fly.

Did you know that there is also a minimum operational temperature? Also when the aircraft is aloft? For example, if you are the pilot of an Airbus A320 and you see a temperature below -94° F at 39,000 ft. it’s better for you to ask for a descent or increase your speed to have a couple of degrees more, or there is an increased risk that fuel may begin to freeze in the pipes.

Aerodynamics has played a big role in the evolution of aircraft design: if you can reduce drag and increase lift your airplane will be able to fly in hotter weather, and be more efficient every flight. Lightweighting is another way of improving aircraft capabilities in hot temperatures. Topology optimization together with new composite materials and production technologies such as additive manufacturing are going in that direction.

We have a new generation of engines, able to produce more power and run with thinner, less dense air that take advantage of not only mechanical and fluid dynamics enhancements but also of complex embedded control software. Electric aircraft are coming, and will stretch the limits of what we have today. This will help to take off on very hot days, but above all will lead to a much better fuel efficiency, lower environmental impact and a significant reduction of operating costs.

Simulation plays a key role in designing more efficient aircraft. If you are curious, have a look at this video to see how.

Start a conversation with ANSYS