Pharmaceutical companies have a problem when it comes to developing drugs to help reduce the number of bone fractures arising from osteoporosis, a disease that weakens the bones of millions of primarily elderly women. It’s not that the companies can’t discover medicines that might help reduce fractures; it’s that they can’t conduct clinical trials that identify fracture reduction as the primary endpoint showing the efficacy of the drug under investigation. The problems are manifold: Such a trial would involve observing more than 1,000 osteoporotic patients fall — repeatedly — for five to 10 years or until they experienced a fracture. Even if there were no ethical concerns about watching Grandma fall down over and over for 10 years, the cost of conducting such a trial would be prohibitive.

As a consequence of these difficulties, pharmaceutical companies don’t run trials that focus on fracture reduction. Instead, they focus on a surrogate endpoint, such as an increase in bone mineral density, to show the efficacy of a drug. Such trials can involve far smaller numbers of participants and need to run for only a few months. But such surrogate endpoints have their own problems. An increase in bone mineral density by itself does not guarantee fewer bone fractures. Bone strength is a function of both the anatomy of the bone and the distribution of bone minerals, and bone strength is the key to reducing fractures. Yet without a five- to 10-year clinical trial involving thousands of osteoporosis patients — repeatedly falling down and not breaking bones — it would be impossible to correlate changes in bone strength to a reduction in bone fractures.

But what if such a correlation could be shown without real people and real bones? Or, for that matter, real time?

At the University of Bologna (UNIBO), biomechanical researchers in the Department of Industrial Engineering have been working closely with the Medical Technology Laboratory at Rizzoli Hospital, the leading orthopedic hospital in Italy, to explore the complexities of the underlying biophysics associated with osteoporosis and falls. Fundamentally, when an individual falls, the skeletal bones are subjected to a physical force. Different types of falls will result in different types and directions of force. Depending on the strength of the force and the strength of the bone, a fall may or may not result in a fracture. Over time, though, osteoporosis will change both the architecture of the bone and density and the distribution of bone mineral in the bone, decreasing bone strength and increasing the risk that a fall will result in a fracture.

Viewed this way, the question of whether a fall will lead to a fracture at any given time is, in the purest sense, an engineering problem — one that UNIBO researchers believed could be solved with the right tools and the right inputs.

The team at UNIBO obtained computer tomography–generated images of femurs from 100 individuals. They analyzed these images using principal component analysis techniques to understand both the anatomical variations and their frequency among the 100 femurs but also the frequency of bone mineral density variations among these femurs. Other internally developed tools enabled the researchers to see exactly how bone mineral deposits were distributed throughout the anatomical architecture of each femur.

Using Ansys Mechanical, the researchers created finite element (FE) models from the CT scans of these 100 real-world femurs. The mesh in each model not only mapped the unique architecture of each femur but it also mapped the distribution of bone minerals throughout each bone. They then replicated and resampled these 100 models to create a total of 1,000 FE models. This cohort precisely reflected the distribution of anatomical and bone mineral density variations that researchers would have expected to find in 1,000 humans with osteoporosis.

The researchers subsequently developed a stochastic model of a fall, with parameters that could take into consideration the patient weight, the amount of soft tissue that might absorb the impact, direction and distance of a fall and more. The UNIBO researchers intended to use Mechanical to put each of these 1,000 models through 100 different fall simulations to correlate bone strength to fracture risk. They then intended to modify the bone mineral composition of each of the 1,000 models in a manner that mirrored the degenerative effect of osteoporosis over the course of a year, whereupon they would rerun all the simulations. Ultimately, they would rerun all these simulations 10 times over, effectively mirroring the observation of 1,000 individuals falling 100 times per year for 10 years as their osteoporosis increases. These simulations would provide the long-sought-after clinical insight without anyone’s actual grandmother having to suffer the indignity and pain of falling and fracturing a hip.

But researchers soon encountered a problem. A single fall simulation took approximately 1.8 hours to solve on the computing resources available at UNIBO. Solving one million simulations, which is what 1,000 virtual patients falling 100 times per year for 10 years amounts to, would take 1.8 million hours — more than 205 years.

That would not do, particularly because the practical application of this in silico clinical trial would eventually involve using these same techniques to model the effect of potential osteoporosis drugs to see whether they could be shown to reduce fractures over time.

Working with Ansys, the researchers at UNIBO used Ansys Mechanical software with the Cartesius supercomputer hosted by SURF in The Netherlands and the Galileo supercomputer hosted by CINECA in Italy. Cartesius is configured as a high-performance computing (HPC) system with more than 1,900 central processing units (CPUs) each with between 16 and 64 compute cores (for a total of more than 47,000 cores). Each CPU is configured with between 64 and 256 GB of memory. Galileo is also configured as an HPC system with 2,044 18-core CPUs (for a total of nearly 36,800 cores), and each CPU is configured with 128 GB of memory. Both Cartesius and Galileo have access to petabytes of storage capacity and ultra-high-performance interconnects that ensure that system resources are used in a highly efficient, highly parallelized manner.

Because Ansys Mechanical is optimized for HPC, UNIBO researchers could run it on thousands of compute cores simultaneously — which dramatically accelerated the completion of the million simulations. What could have taken 200 years if executed serially took less than two weeks when run on Cartesius and Galileo.

On the Road to In Silico Trials

The researchers at UNIBO are well on the way to creating an opportunity for true in silico clinical trials whose endpoint is the reduction of fractures in osteoporotic patients. The initial findings form the basis for what would, with regulatory approval (itself a goal involving many hurdles yet to be encountered), be considered the placebo arm of a clinical trial. What the researchers have modeled using Mechanical and HPC systems represents risk of fractures among a cohort of 1,000 individuals whose osteoporosis has evolved unimpeded over the course of 10 years. Against this, clinical researchers could analyze new FE models to simulate the effect of an investigative osteoporosis drug over the course of 10 years to see whether the drug increases bone strength and decreases the risk of fractures in comparison to the placebo group.

But more work remains for the researchers at UNIBO. They need to learn how to model the effects of prospective osteoporosis drugs in their FE models, which involves learning how to take data showing the effect of an investigative agent on an animal population and scaling that properly to model the effect of the drug in a human population — a task that poses its own challenges. Then they have to simulate the effect of those potential drugs in the cohort of 1,000 virtualized participants (falling 100 times during each of 10 simulated years). Ultimately, that means solving another million simulations in which the investigational agent now plays a modifying role each year. Does the bone grow stronger? Does the risk of fracture decline as a consequence of prolonged medication use?

“Because Ansys Mechanical is optimized for HPC, UNIBO researchers could run it on thousands of compute cores simultaneously ... What could have taken 200 years if executed serially took less than two weeks.”

More From This Issue:

Promoting the Benefits of In Silico Medicine

Using Simulation and In Silico Models to Simulate Biological Processes

A Breath of Fresh Air

A Better Way to Generate and Deliver X-Rays

A Formula for Success

Motorizing the Bike You Love with Bimotal and Ansys Simulations 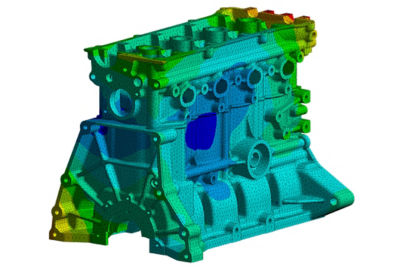