“I think SpaceClaim is fantastic — it’s made my work so much easier. The integration of SpaceClaim and Fluent in Ansys Workbench makes doing parametric studies much, much easier today than it was 5 or 6 years ago. As a customer, I’m very happy. But the software is just one side — it’s important, but having people who are doing support and working alongside you as a partner, that to me is the difference between Ansys and some other CFD package. It’s the people that make a big difference and that’s something we really appreciate".

Astec, Inc. designs and manufactures hot mix asphalt plants, including burners used to dry the aggregate (rock) before it is coated with liquid asphalt cement binders. The low CO and NOx emissions required by regulations can be achieved by mixing fuel and air perfectly before combustion. A novel burner design using an array of mixing tubes with injection holes, swirlers and flow straighteners was successful, but expensive to manufacture. Longevity and cost were a concern with the 3D printed swirlers, so Astec engineers began to look for simpler and cheaper alternatives that could still maintain near ideal gas/air mixing.

The existing burner design was developed using CFD, but time constraints did not permit a comprehensive investigation of all possible parameters. After attending an Ansys user conference, Astec engineers decided to try using the Design of Experiments (DOE) capabilities of Ansys DesignXplorer to investigate the gas mixing tube design, with a goal of determining whether they could find an optimum configuration to maximize gas mixing. By varying the simulation parameters systematically they were better able to understand the design space.

SpaceClaim made preparing the burner’s geometry for meshing very easy. After running a parametric study of fuel and air mixing using 96 design points (varying the number of injection holes in the burner tube, the distance from the tube inlet to the hole pattern, the tube radius and tube length), Astec engineers were surprised to find a configuration that they had previously never considered produced better mixing than their existing design. Furthermore, the new configuration without swirlers mixed gases better than the six-hole design with swirlers. Physical testing of the new design also showed that burner performance and emissions data were as good or better than the existing design.

Astec, Inc. was able to save $3,400 in cost per burner by eliminating swirlers and straighteners — the combined effects of reduced materials, 3D printing costs (for swirlers) and labor hours. This savings was achieved by running Ansys Fluent simulations over the course of one week. The new, simpler design maintains the high quality gas mixing, which results in low CO and NOx emissions, helping them to meet strict environmental regulations. In addition, Astec engineers found that Ansys DesignXplorer is an accessible technology both in terms of cost and hardware. By completing this project on two 16-core workstations, it showed them that DesignXplorer can be very useful (and essentially pay for itself) even if you don’t have a giant HPC system.

Astec, Inc. designs, manufactures and markets a complete line of continuous and batch-process hot-mix asphalt facilities, and soil remediation equipment. From a 1972 start-up, Astec, Inc. has grown to become the hot-mix asphalt plant market leader by being a customer-driven company. To date, the company holds approximately 53 U.S. and 20 foreign patents. It is headquartered in Chattanooga, Tennessee, USA. 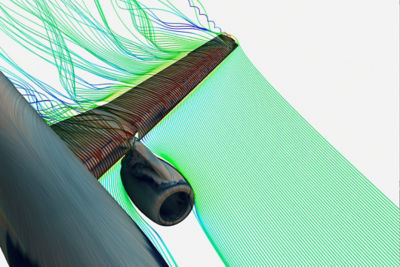